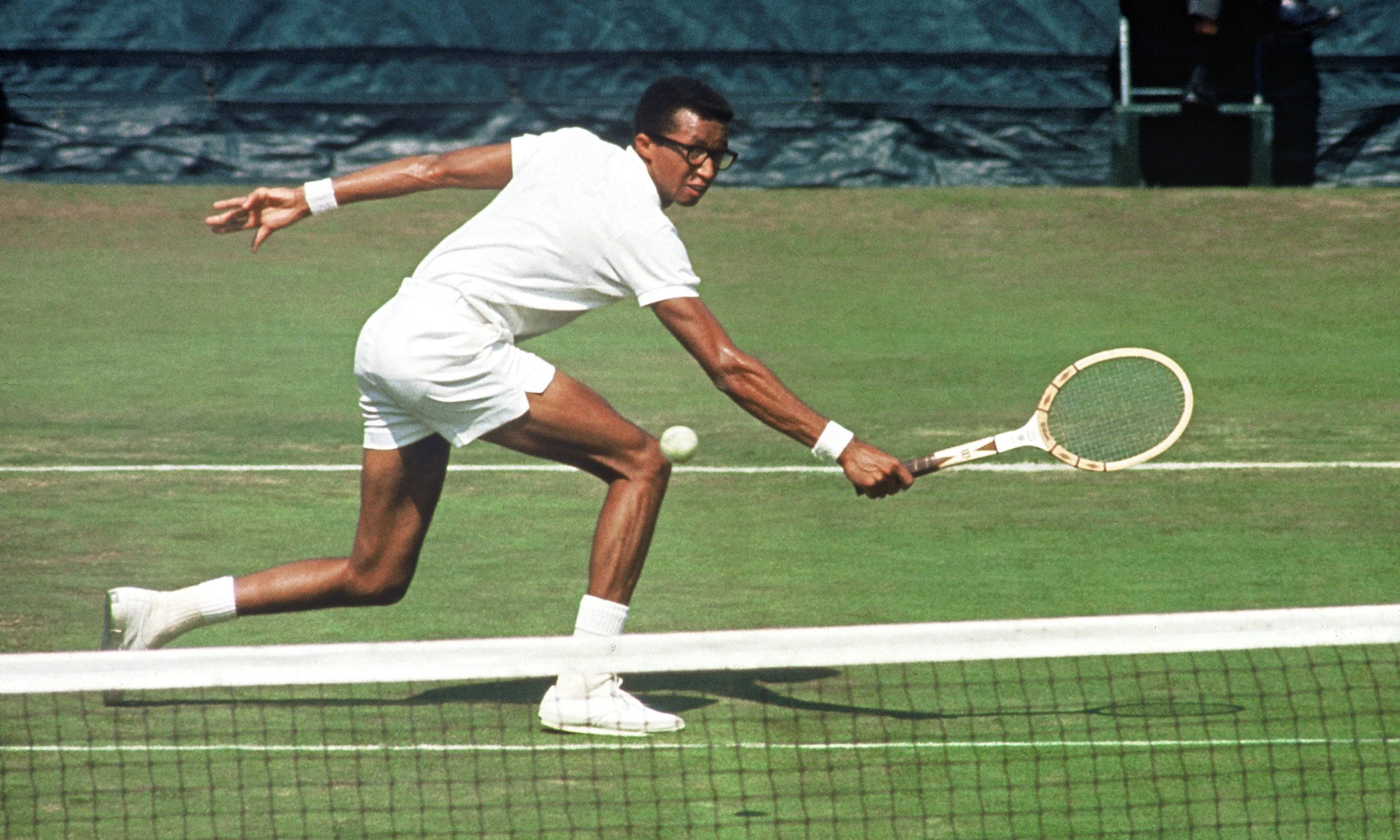 Arthur Ashe was born on July 10, 1943  in Richmond, Virginia. As a child growing up in segregated Richmond, Arthur’s physical stature did little to indicate his future career as a professional athlete. “Skinny as a straw,” Arthur derived countless hours of pleasure reading and listening to music with his mother, Mattie. He also showed a surprising flair for tennis from the first time he picked up a racquet. At the age of six, Mattie passed away suddenly. Though heartbroken, Arthur’s memory of his beloved mother was a source of inspiration throughout his life.

Upon graduation from high school, Arthur was good enough to earn a tennis scholarship to UCLA. It was at UCLA that Arthur earned recognition for his tennis abilities on a national level, culminating with an individual and team NCAA championship in 1965. He was also growing as a person as well, graduating in 1966 with a BA in Business Administration.

Ashe was selected in 1963 to represent the United States in Davis Cup play, an honor in which he took great pride. In doing so, he also became the first African American to be selected to play for the United States team. In actuality, Arthur Ashe was a trailblazer for African American males in tennis every time he succeeded on the court, in much the same fashion as Althea Gibson had for African American females some 10 years earlier. The relevance of these accomplishments was not lost on Ashe. His determination to succeed despite being an outcast in a historically white sport was put to an even greater test in 1969.

In a year (1969), when he was basking in the international fame, he had gained the previous year after winning the US Open and playing a key role on the United States winning Davis Cup team, two separate issues came to the forefront and helped shape Arthur the activist, a role he never ran from throughout his life if he believed in the cause. At a time when tennis’ popularity was growing by leaps and bounds, the amount of prize money being offered to the players, the “drawing cards,” was lagging disproportionately behind. Ashe and several other players formed in 1969, what later became known as the ATP (Association of Tennis Professionals). It is from this small and visionary beginning that today’s top players enjoy the large sums of prize money for which they compete. Later that year, as the #1-ranked American and one of the best players in the world, Arthur applied for a visa to play in the South African Open, a prestigious event. His visa was denied because of the color of his skin. Though Arthur was well aware that this would probably be the case, he decided to take a bold stand. His call for expulsion from South Africa from the tennis tour and Davis Cup play was quickly supported by numerous prominent individuals and organizations, both in and out of the tennis world. In effect, he raised the world’s awareness to the oppressive form of government (apartheid) of South Africa. Buoyed by Arthur Ashe’s initial efforts, blacks in South Africa slowly but surely began to see change come about in their country.

As a tennis player, Arthur Ashe was one of the most prominent players of his time; an all-out competitor who rarely beat himself. His legacy, however, will be the positive changes he helped bring about and the causes he championed, both within tennis and in society as a whole. Always at his best he was for many the very definition of tennis, yet tennis never defined Arthur Ashe.

By the mid-1970s, people began to whisper that perhaps Arthur was spending too much time on his causes and not enough time on his game. It was from this realization that Arthur began to refocus on his game, determined to reach the level of play he once enjoyed. In 1975, at the age of 31, Arthur Ashe enjoyed one of his finest seasons ever and one of the shining moments of his career by winning Wimbledon. He also attained the ultimate ranking of #1 in the world.

Following his retirement in 1980, and unexpected heart surgeries in 1979 and 1983, Arthur began reaping awards and branching off into other professional areas, including journalism, the media and philanthropic endeavors. Included among those were positions as a commentator for HBO Sports and ABC Sports, as a columnist for The Washington Post and Tennis magazine, the publishing of Arthur’s 3-volume body of work, “A Hard Road To Glory,” a stint as captain of the US Davis Cup team, a well-deserved election to the Tennis Hall of Fame in 1985, and the founding of numerous charitable organizations, including the National Junior Tennis League, the ABC Cities Tennis Program, the Athlete-Career Connection, and the Safe Passage Foundation.

Arthur looked to be making a smooth transition into the second-half of his life, even becoming a father in 1986, when his daughter Camera Elizabeth arrived. During a doctor’s exam in 1988, however, the Ashe’s lives were irrevocably changed.

While in the hospital for brain surgery, Arthur received the overwhelming news that he was HIV-Positive. He had contracted the virus through a tainted transfusion during his two heart surgeries, almost certainly the second in 1983. Wishing to maintain his and his family’s privacy, and well-aware of the prejudice and paranoia that was often associated with the disease during its first years of existence, the Ashe’s, with help from close friends and trusted medical advisors, were able to keep the startling information from the public’s awareness. At issue were Arthur and Jeanne’s desire to raise their daughter, Camera, in as normal an environment as possible, a desire that would have been made impossible with a public disclosure.

Because of pressure from a national newspaper that was indicating they had on good record that he had AIDS, Arthur, rather than let the rumors persist, elected to make his condition known to the world through a scheduled a press conference on the morning of April 8, 1992. The knowledge that his life and the lives of his family members would forever be altered was foremost on Arthur’s mind. After his admission to the world, an outpouring of compassion and support arrived, inspiring Arthur to begin AAFDA. This outpouring can only perhaps be compared to the day Lou Gehrig announced his retirement and contraction of amyotrophic lateral sclerosis. Arthur Ashe passed away on February 6, 1993, having raised awareness of AIDS to a level where paranoia was no longer the overriding emotion.

For Arthur Ashe, tennis was a means to an end. What began on the public recreation courts in Richmond, Virginia, ultimately became a lucrative, illustrious 10-year career. In between were many honors and awards, including three Grand Slam singles titles and over 800 career victories. But for Arthur, it was always more than personal glory and individual accolades. Rather, it was the knowledge that his status as an elite tennis player afforded him a unique and worldwide platform to speak out about inequities, both in the tennis world and society as a whole. That in and of itself was unique, but not outstanding. Arthur stood out when he chose to utilize his status to bring about change. That is what makes his legacy so unique and important.