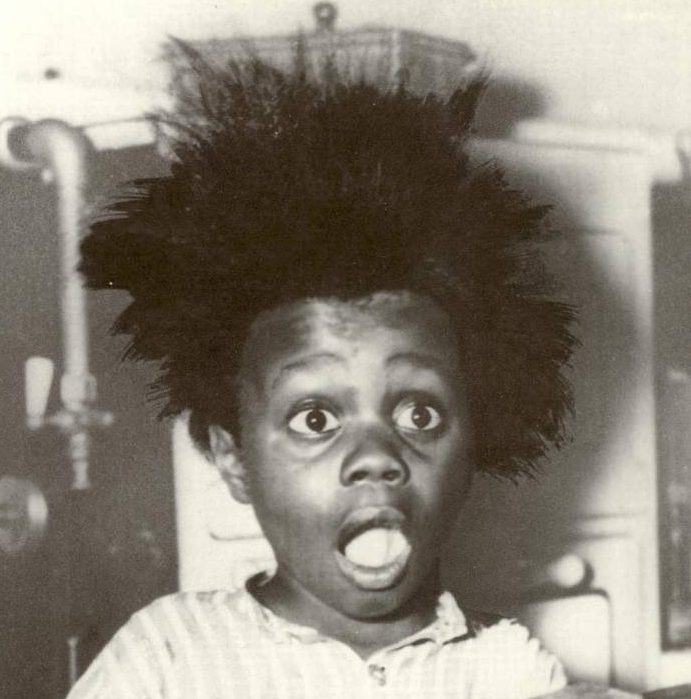 William “Billie” Thomas, Jr. (March 12, 1931 – October 10, 1980) was an American child actor best remembered for portraying the character of Buckwheat in the Our Gang (Little Rascals) short films from 1934 until the series’ end in 1944. He was a native of Los Angeles, California. Although the character he played was often the subject of controversy in later years for containing elements of the “pickaninny” stereotype, Thomas always defended his work in the series, pointing out that Buckwheat and the rest of the black Our Gang kids were treated as equals to the white kids in the series.

Billie Thomas first appeared in the 1934 Our Gang shorts, For Pete’s Sake!, The First Round-Up, and Washee Ironee as a background player. The “Buckwheat” character was a female at this time, portrayed by Our Gang kid Matthew “Stymie” Beard’s younger sister Carlena in For Pete’s Sake!, and by Willie Mae Walton in three other shorts.

Thomas began appearing as “Buckwheat” with 1935’s Mama’s Little Pirate. Despite Thomas being a male, the Buckwheat character remained a female—dressed as a Topsy-esque image of the African-American “pickaninny” stereotype with bowed pigtails, a large hand-me-down sweater and oversized boots. After Stymie’s departure from the series later in 1935, the Buckwheat character slowly morphed into a boy, first referred to definitively as a “he” in 1936’s The Pinch Singer. This is similar to the initial handling of another African American Our Gang member, Allen “Farina” Hoskins, who worked in the series during the silent and early sound eras.

Despite the change in the Buckwheat character’s gender, Billie Thomas’s androgynous costuming was not changed until his appearance as a runaway slave in the 1936 Our Gang Feature film General Spanky. This new costuming—overalls, striped shirt, oversized shoes, and a large unkempt Afro—was retained for the series proper from late 1936’s Pay as You Exit on.

Thomas remained in Our Gang for 10 years, appearing in all but one of the shorts made from Washee Ironee in 1934 through the series’ end in 1944. During the first half of his Our Gang tenure, Thomas’ Buckwheat character was often paired with Eugene “Porky” Lee as a tag-along team of “little kids” rallying against (and often outsmarting) the “big kids,” George “Spanky” McFarland and Carl “Alfalfa” Switzer. Thomas had a speech impediment as a young child, as did Lee, who became Thomas’ friend both on the set and off. The “Buckwheat” and “Porky” characters both became known for their collective garbled dialogue, in particular their catchphrase, “O-tay!” originally uttered by Porky, but soon shared by both characters.

Thomas remained in Our Gang when the series changed production from Hal Roach Studios to Metro-Goldwyn-Mayer in 1938. Thomas was the only Our Gang cast member to appear in all 52 MGM Our Gang shorts, and was also the only holdover from the Hal Roach era to remain in the series until its end in 1944. By 1940, Thomas had grown out of his speech impediment, and with Lee having been replaced by Robert Blake, Thomas’s Buckwheat character was written as an archetypal black youth. He was 12 years old when the final Our Gang film, Dancing Romeo, was completed in November 1943. Thomas died of a heart attack in his Los Angeles apartment on October 10, 1980, 46 years to the day after his mother brought him to audition at the Hal Roach Studios. Thomas is interred at Inglewood Park Cemetery in Inglewood, California.