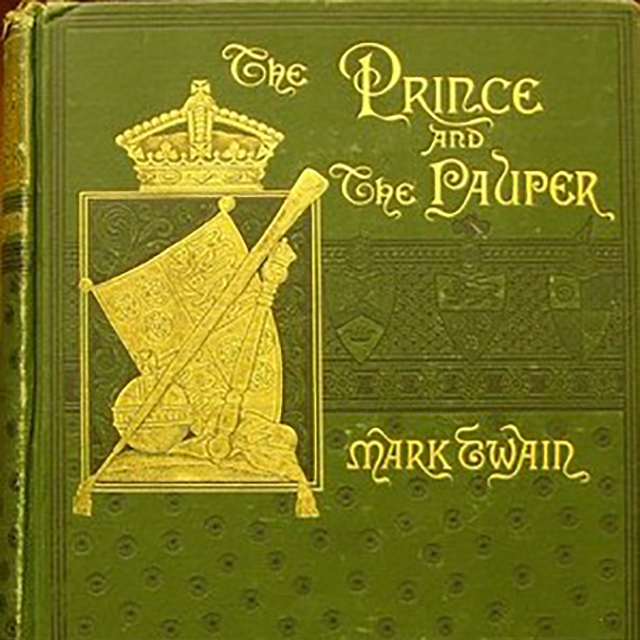 The Prince and the Pauper is a novel by American author Mark Twain. It was first published in 1881 in Canada, before its 1882 publication in the United States. The novel represents Twain’s first attempt at historical fiction. Set in 1547, it tells the story of two young boys who are identical in appearance: Tom Canty, a pauper who lives with his abusive father in Offal Court off Pudding Lane in London, and Prince Edward, son of King Henry VIII.

Tom Canty, youngest son of a poor family living in Offal Court, London, has always aspired to a better life, encouraged by the local priest (who has taught him to read and write). Loitering around the palace gates one day, he sees a prince (the Prince of Wales – Edward VI). Coming too close in his intense excitement, Tom is nearly caught and beaten by the Royal Guards; however, Edward stops them and invites Tom into his palace chamber. There the two boys get to know one another, fascinated by each other’s life and their uncanny resemblance; they were born on the same day. They decide to switch clothes “temporarily”. The Prince momentarily goes outside, quickly hiding an article of national importance (which the reader later learns is the Great Seal of England), but dressed as he is in Tom’s rags, he is not recognized by the guards, who drive him from the palace, and he eventually finds his way through the streets to the Canty home. There he is subjected to the brutality of Tom’s abusive father, from whom he manages to escape, and meets one Miles Hendon, a soldier and nobleman returning from war. Although Miles does not believe Edward’s claims to royalty, he humors him and becomes his protector. Meanwhile, news reaches them that King Henry VIII has died and Edward is now the king.

Tom, posing as the prince, tries to cope with court customs and manners. His fellow nobles and palace staff think “the prince” has an illness which has caused memory loss and fear he will go mad. They repeatedly ask him about the missing “Great Seal”, but he knows nothing about it; however, when Tom is asked to sit in on judgments, his common-sense observations reassure them his mind is sound.

As Edward experiences the brutish life of a pauper firsthand, he becomes aware of the stark class inequality in England. In particular, he sees the harsh, punitive nature of the English judicial system where people are burned at the stake, pilloried, and flogged. He realizes that the accused are convicted on flimsy evidence (and branded – or hanged – for petty offenses), and vows to reign with mercy when he regains his rightful place. When Edward unwisely declares to a gang of thieves that he is the king and will put an end to unjust laws, they assume he is insane and hold a mock coronation.

After a series of adventures (including a stint in prison), Edward interrupts the coronation as Tom is about to celebrate it as King Edward VI. Tom is eager to give up the throne; however, the nobles refuse to believe that the beggarly child Edward appears to be is the rightful king until he produces the Great Seal that he hid before leaving the palace. Tom declares that if anyone had bothered to describe the seal he could have produced it at once since he had found it inside a decorative suit of armor (where Edward had hidden it) and had been using it to crack nuts.

Edward and Tom switch back to their original places and Miles is rewarded with the rank of earl and the family right to sit in the presence of the king. In gratitude for supporting the new king’s claim to the throne, Edward names Tom the “king’s ward” (a privileged position he holds for the rest of his life).