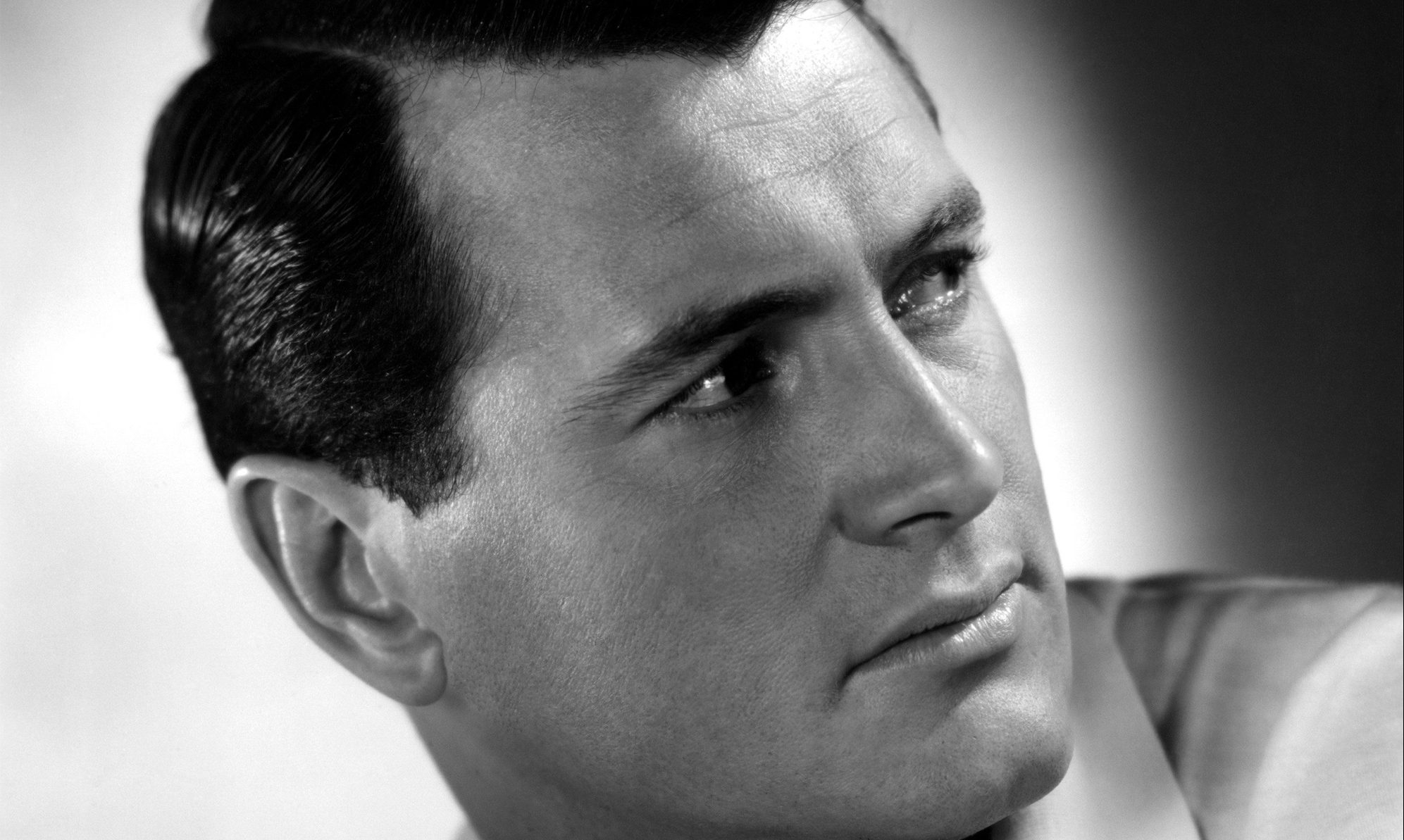 His immaculate good looks, suave sophistication and stunning influence captured the hearts and minds of fans everywhere. As one of the most dashing silver screen stars of the 1950s and 1960s, Rock Hudson was the epitome of Hollywood’s leading man.

Rock Hudson was born Roy Harold Scherer Jr. on November 17, 1925 in Winnetka, Illinois. His father, an auto mechanic, left the family when Rock was eight years old. Rock’s mother, a telephone operator named Katherine Wood, was left to raise her son alone until she remarried Wallace Fitzgerald a few years later. Rock took his stepfather’s name when Fitzgerald adopted him, making his name Roy Fitzgerald. During his school years, Rock decided to become an actor, although he did not immediately pursue his goal.

After graduating high school, Rock worked for the United States Postal Service before entering the Navy to serve as an airplane mechanic during World War II. When he arrived back in America after the war, Rock moved to California, where he had various jobs including driving a truck and working for a moving company.

Rock began to pursue an acting career by sending his photo to various Hollywood film studios and taking acting, singing, fencing and riding lessons. He changed his name from Roy Fitzgerald to Rock Hudson so it would be shorter, easier to pronounce and sound more masculine. Despite having no acting experience, these steps landed him a bit part in the 1948 film, “Fighter Squadron.” This film marks the beginning of a career that lasted more than 30 years. Over the next few years, Rock scored parts in several films. His talent, stature and good looks made him an alluring box office draw.

In the early 1950s Rock began to win more major parts, acting opposite Yvonne De Carlo in “Scarlet Angel” and “Sea Devils,” and starring in movies such as “Magnificent Obsession,” with Jane Wyman, “The Lawless Breed” and “Seminole.” In 1956, Rock starred in “Giant” with James Dean and Elizabeth Taylor, a role for which he won a Best Actor Academy Award nomination. He also acted in a 1957 film adaptation of Ernest Hemingway’s “A Farewell to Arms.” The next year, Look magazine named Rock “Star of the Year.”

Rock married his agent’s secretary, Phyllis Gates, in 1955. It was an instant attraction for both: Rock admired the way Phyllis didn’t treat him like a movie star, and Phyllis was swept away by his flawless charm. However, the union lasted three short years. Rock would travel constantly, shooting new films or visiting with friends, leaving Phyllis at home. Her best efforts to salvage the marriage were in vain, as Rock started to losing interest in the marriage while his burgeoning film career was taking off. Phyllis filed for divorce in 1958 and neither married again.

Rock starred opposite Doris Day in the 1959 film “Pillow Talk.” The pair was so successful in this first film that they worked together in two other romantic comedies of the early 1960s, “Lover Come Back” and “Send Me No Flowers.”

While his popularity as a handsome leading man in films continued, the 1970s brought Rock into a new medium: television. From 1971 to 1977, he starred opposite Susan St. James in the popular television series “McMillan and Wife.” Although he made fewer movies in the 1970s, Rock did star in “Showdown” with Dean Martin (1973) and “Avalanche” with Mia Farrow (1978), among others. Rock had a stint on the popular television series “Dynasty” from 1984 to 1985. His last Hollywood movie was the 1984 film, “The Ambassador.”

Rock began having health problems in the early 1980s. After years of heavy smoking, he underwent quintuple bypass heart surgery in 1981. His health continued to decline when, three years later, Rock announced that he was dying from AIDS. Because he was the first celebrity to publicly acknowledge his suffering from the disease, Rock’s illness changed the overwhelming perception of AIDS and brought new attention to the epidemic. Tragically, Rock died of the disease on October 2, 1985 in Beverly Hills, California. His remains were cremated and scattered at sea.

Rock completed nearly 70 motion pictures and starred in several television productions during a career that lasted over three decades. An incredible film icon, Rock’s timeless influence in Hollywood will live on for generations.