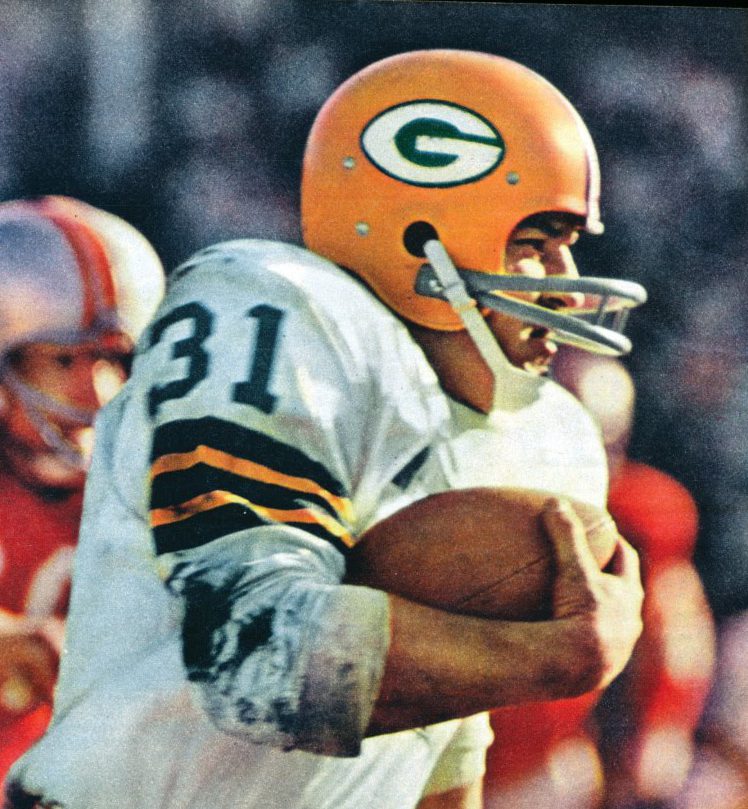 Born in Baton Rouge, Louisiana, on September 30, 1935, James Charles Taylor had two paper routes to help his widowed mother make ends meet. He delivered the morning and afternoon routes by bicycle for three dollars a week, which helped to develop his leg muscles. Though he did not play football until his junior year, he was a star athlete in four sports at Baton Rouge High School and graduated in 1954. He stayed in town and played college football at Louisiana State University for coach Paul Dietzel’s LSU Tigers football team. Taylor played on LSU’s freshman team in 1954, but due to struggles in the classroom, he transferred to Hinds Community College in Raymond, Mississippi as a sophomore, where he met his future wife Dixie Grant. He then returned to LSU as a junior.

Taylor rushed for 1,314 yards and scored 20 rushing touchdowns over his LSU career and led the Southeastern Conference (SEC) in scoring in 1956 and 1957. “With the ball under his arm, Jimmy Taylor was the best running back I’ve ever coached,” said Dietzel. “He was just so versatile.” After spending the first half of his junior season learning the offense, Taylor scored 51 points in the team’s final five games of 1956.  As a senior in 1957, he shared the backfield with future Heisman Trophy winner Billy Cannon, a combination that accounted for over 1,500 yards from scrimmage and 17 touchdowns that season. Against Texas Tech, due to the Red Raiders’ focus on containing Taylor, Cannon had one of the most productive games of his career. The following week, Taylor scored three touchdowns in LSU’s 20–13 upset of a No. 17 Georgia Tech team whose focus was on stopping Cannon. In his final college game, Taylor carried 17 times for 171 yards and two touchdowns in a 35–6 victory over in-state rival Tulane. He was selected as a first-team All-American by the Football Writers Association of America, and earned first-team All-SEC honors from the Associated Press (AP) and United Press (UPI).  After the season, he played in the Senior Bowl and was named the game’s most valuable player.

Taylor was selected by the Packers in the second round of the 1958 NFL draft, the 15th overall pick, taken in December 1957 while Lisle Blackbourn was still the head coach. His rookie contract was worth $9,500. That draft for the Packers included future stars Dan Currie (3rd), Ray Nitschke (36th), and Jerry Kramer (39th), but the 1958, the  team finished with the worst record in the league (and the franchise’s worst ever, through 2016), under first-year NFL head coach Ray “Scooter” McLean. Taylor was used sparingly as a rookie, but in the penultimate game at Kezar Stadium, he gained 137 yards on 22 carries in a 48–21 loss to the San Francisco 49ers, and his running style brought cheers from the San Francisco fans. With a one-year contract that was not to be renewed, McLean resigned days after the season and was replaced by Vince Lombardi in January 1959.

In the 1960s, Lombardi implemented the “Packer Sweep” play in which guards Jerry Kramer and Fuzzy Thurston rapidly pulled out from their normal positions and led blocking for Hornung and Taylor. It became an integral part of the Packers’ offense throughout the decade. In 1961, Taylor carried 243 times for 1,307 yards and led the league with 15 rushing touchdowns. For the second year in a row, his rushing yards total was second to Jim Brown of the Cleveland Browns. Taylor was selected as the second-team fullback behind Brown on the United Press International (UPI) All-Pro team and finished second in voting behind Brown for the Associated Press (AP) team. The Packers again reached the NFL title game, this time defeating the New York Giants with a 37–0 shutout. Taylor had 69 yards on 14 attempts while playing despite badly damaged ribs, as Hornung carried most of the load for Green Bay.

Taylor’s most productive season was 1962. With Hornung missing most of the season due to injury, Taylor picked up the slack. He set a league record by scoring 19 touchdowns and won the NFL rushing title with 1,474 yards, notable for being the only season in which Jim Brown did not lead the league during his nine-year career. Also the season’s scoring leader, he became the third player in NFL history to lead the league in both rushing yards and total points scored, following Steve Van Buren and Brown. He was named the “Player of the Year” by the AP, and was also awarded the Jim Thorpe Trophy by the Newspaper Enterprise Association (NEA) as the NFL’s players’ choice for league MVP. He earned first-team All-Pro honors from the AP, UPI, and NEA. In July 1967, Taylor left the Packers for the expansion New Orleans Saints to play under head coach Tom Fears, a hall of fame receiver and a former assistant coach for five seasons in Green Bay under Lombardi. He was signed to four one-year contracts with the Saints, worth $68,000 for 1968 and $72,000 for each subsequent season. The Saints also signed Hornung, though he retired prior to the 1967 season. Taylor recorded his lowest rushing statistics since his rookie season, but was still relatively productive as a receiver, catching 38 passes. Prior to the 1968 season, he was relegated to special teams duties, and as a result he refused to play in that week’s exhibition game. Taylor retired from pro football in September, at the end of training camp.

Despite academic ineptitude, Taylor became a successful businessman after his football career. He was commissioner of the United States Rugby League in 1978 and attempted to start a 12-team competition. He also maintained his physical condition well after his playing days; he participated in the Superstars competition in 1977 and finished fourth in 1979. In 2000, aged 65, he was jogging five to six miles daily to stay in shape. Taylor was diagnosed with hepatitis C in 1989, but it was found to be dormant by 2000. As of 2016, Taylor lives in Baton Rouge with his wife, Helen.