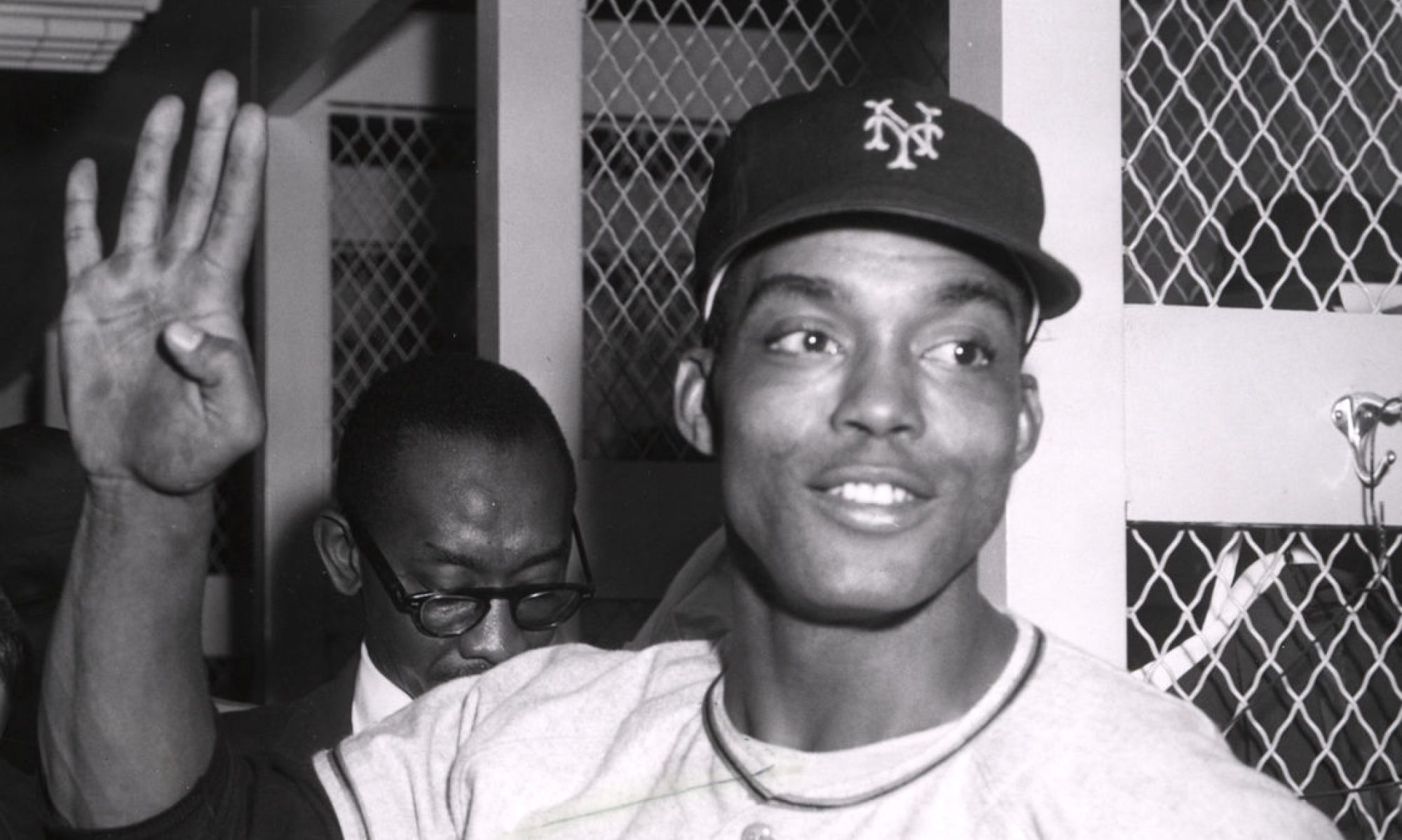 Irvin was born February 25, 1919 in Haleburg, Alabama, and was the eighth of 13 children. As a child, he moved with his family to Orange, New Jersey, one of five players who grew up in the Garden State to be elected to the Baseball Hall of Fame. In high school, he starred in four sports and set a state record in the javelin throw. Irvin played baseball for the Orange Triangles, the local semi professional team, and he credited its coach with giving him an activity that helped him to stay out of trouble. He was offered a football scholarship to the University of Michigan, but he had to turn it down because he did not have enough money to move to Ann Arbor.

Irvin attended Lincoln University and was a star football player. However, he had disagreements with his coach, and he found that he could not remain on his athletic scholarship and pursue pre-dentistry studies. As his frustration mounted, Irvin began to be recruited by Negro league baseball teams.

Irvin played for the Newark Eagles of the Negro National League in 1938. Larry Doby, the first player to break the color barrier in the American League, was Irvin’s double play partner with Newark at one time. After hitting for high batting averages of .422 and .396 (1940–41), Irvin asked for a raise before the 1942 season. When he was denied, he left the Negro leagues for the Mexican League, where he won a triple crown; he had a .397 batting average and 20 home runs in 63 games.

Following the 1942 Mexican League season, Irvin was drafted into military service. Joining the army’s GS Engineers, 1313th Battalion, for the next three years, Irvin was deployed to England, France, and Belgium, and he served in the Battle of the Bulge. Irvin said that, while many black soldiers had been treated badly by their white counterparts, the situation improved for black soldiers as many white soldiers realized the contradiction in an oppressed group being sent to Europe to fight for the oppressed people in other countries. Irvin’s military service left him with ringing in the ears, which affected his coordination.

After World War II, Irvin was approached by Brooklyn Dodgers executive Branch Rickey about being signed for the major leagues, but Irvin felt he was not ready to play at that level so soon after leaving the service. The Newark Eagles business manager, Effa Manley, would not let Rickey sign Irvin without compensation. Rickey had already obtained Jackie Robinson without paying for his rights to his Negro league clubs.

Irvin earned MVP honors in the 1945–46 Puerto Rican Winter League. He returned to the Newark Eagles in 1946 to lead his team to a league pennant. Irvin won his second batting championship, hitting .401, and was instrumental in beating the Kansas City Monarchs in a seven-game Negro League World Series, batting .462 with three home runs. He was a five-time Negro League All-Star (1941 and 1946–48, including two games in 1946). He spent the winter of 1948–49 in Cuba.

In 1949, the New York Giants paid $5,000 for his contract. He was one of the first black players to be signed, as Jackie Robinson had only broken the MLB color line in 1947. Assigned to Jersey City of the International League, Irvin batted .373. He debuted with the Giants on July 8, 1949 as a pinch-hitter. Back with Jersey City in 1950, he was called up after hitting .510 with 10 HR in 18 games. Irvin batted .299 for the Giants that season, playing first base and the outfield.

In 1951, Irvin sparked the Giants’ miraculous comeback to overtake the Dodgers in the pennant race, batting .312 with 24 homers and a league-best 121 runs batted in (RBI), en route to the World Series (he went 11–24 for .458). In the third game of the playoff between the Giants and Dodgers, Irvin popped out in the bottom of the ninth inning before Bobby Thomson hit the Shot Heard ‘Round the World. That year Irvin teamed with Hank Thompson and Willie Mays to form the first all-black outfield in the majors. Later, he finished third in the NL’s MVP voting.

During that season, Giants manager Leo Durocher asked Irvin to serve as a mentor for Mays, who had been called up to the team in May. Mays later said, “In my time, when I was coming up, you had to have some kind of guidance. And Monte was like my brother… I couldn’t go anywhere without him, especially on the road… It was just a treat to be around him. I didn’t understand life in New York until I met Monte. He knew everything about what was going on and he protected me dearly.” Irvin later replied, “I did that for two years and in the third year he started showing me around.”

In 1955, Irvin had been sent down to the minor leagues, where he hit 14 home runs in 75 games for the Minneapolis Millers. The Chicago Cubs signed him before the 1956 season. The team said that he would compete with Hank Sauer for a starting position in left field. Irvin appeared in 111 games for the Cubs that year, hitting .271 with 15 home runs.

A back injury led to Irvin’s retirement as a player in 1957. He sustained the injury during spring training that year and only appeared in four minor league games for the Los Angeles Angels of the Pacific Coast League. In his major league career, Irvin batted .293, with 99 home runs, 443 RBI, 366 runs scored, 731 hits, 97 doubles, 31 triples, and 28 stolen bases, with 351 walks for a .383 on-base percentage, and 1187 total bases for a .475 slugging average in 764 games played.

After retiring, Irvin worked as a representative for the Rheingold beer company, and later as a scout for the New York Mets from 1967 to 1968. He was named an MLB public relations specialist for the commissioner’s office under Bowie Kuhn in 1968. The appointment made him the first black executive in professional baseball. He was elected to the Mexican Professional Baseball Hall of Fame in 1972.The next year, he was inducted into the Baseball Hall of Fame, primarily on the basis of his play in the Negro leagues.

In 1974, Kuhn was present in Cincinnati when Hank Aaron tied Babe Ruth’s record of 714 career home runs. When the team came back to Atlanta, Kuhn sent Irvin in his place, so Kuhn was not present for Aaron’s 715th home run. Even as late as 1980, Aaron was so angry at Kuhn that he did not attend an event where Kuhn was to present him with an award.

Irvin stepped down from his role with the commissioner when Kuhn announced his retirement in 1984. He retired to Florida, but he accepted an MLB role involving special projects and appearances.

On June 26, 2010, the San Francisco Giants officially retired his number 20 uniform. He was joined by fellow Hall of Famers Willie Mays, Willie McCovey, Juan Marichal, Gaylord Perry and Orlando Cepeda in the pre-game ceremony. He later joined those same Giants Hall of Famers in throwing out the ceremonial first pitch of Game 1 of 2010 World Series. In 2015, he was presented a 2014 World Series ring by Giants executives and later joined the Giants in visiting the White House.

On January 11, 2016, Irvin died of natural causes in Houston at the age of 96. At the time of his death, Irvin was the oldest living African American to have played in the major leagues, as well as the oldest living member of a World Series-winning team. Prior to his death, he lived in a retirement community in Houston. He also served on the Veterans Committee of the Hall of Fame. The Giants wore a patch in his memory for the 2016 season, a black circle with an orange outline with “Monte” on top of his number 20, to be worn on the left sleeve.